Fur Trade Days is to Chadron, Nebraska, as Mardi Gras is to New Orleans.  Oh, sure, the Mardi Gras "krewes" throw a lot more stuff from the floats – and they definitely do have a wider variety of music venues across the city – but hey – Fur Trade Days' "Bordeaux Creek Fur Trade and Muzzleloading Association’s Rendezvous" pays homage to the fur trade and its value to this region of North America.  And, of course, the Fur Trade parade "throws" includes the World Championship Buffalo Chip Throw! 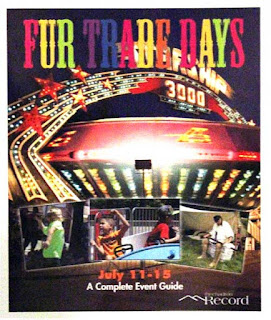 Fact is, for the difference in size, the Chadron community hosts more events and activities than you can shake a stick at.  Carnivals, music, historical walks, treasure hunts, story telling.  Our favorite venues this year included the Greenwood Cemetery Tour and the events on the Courthouse grounds.  On parade day, Saturday, there's food, music from bygone eras, including "Songs and Dances of the Lakota."


Visits to the Dawes County Museum and the world-class Museum of the Fur Trade are "musts" for newcomers.  And they remain high on the list for returnees.  We always see something new.

Topping our list, though, is crossing paths with folks who return year after year – many of them "youngsters" who attended Chadron Assumption, Chadron High, Chadron Prep, Chadron Prep, and even Chadron State College (perhaps a few attended when it was Chadron Normal.)  We've discovered over the years that the Courthouse grounds is a favorite place to chat with fellow ex-students, their families, and others who visit this event.  Of course, the cake and ice-cream served across the street at the Congregational Church is an added incentive!

At the American Legion Club in Chadron on Friday evening, July 12th, a few dozen alums from 1957, 1958, and 1959 at Chadron High gathered for a "picnic" buffet and an evening of reminiscing.  They're shown in the photo below – but if you want a closer look, we invite you to take a moment and visit our "Dawes County School Gallery," where you'll also find their names.

Of course, there's so much going on during Fur Trade Days, one can't attend everything, even though some of us try.  We know there were a similar "alumni" gathering for Chadron Prep – and likely Chadron Assumption.  Alas, we couldn't make them all, but we're hoping one of our good neighbors will contact us and share any photos that we could post.

One Fur Trade Days event we were delighted to witness this year was the Cemetery Walk at Greenwood Cemetery on Saturday.  Despite being outnumbered by mosquitoes, a few dozen folks partook the event, which featured nine people from the "early days" of the region.

It was Ray and Faye Graves who operated an early Chadron photo studio that preceded the old "O'Neill Photo Company."  Of course, a few returning to Chadron will remember the Marten's place not far from town.  They grew delicious watermelons. Late-night visits to the Martens watermelon patch was almost a rite of passage for more than just a few area youth – present company excepted, of course!

This was the 43rd year for Fur Trade Days.  We suspect next year's event will be well worth the wait.  You can check out the Fur Trade Days website for the countdown.