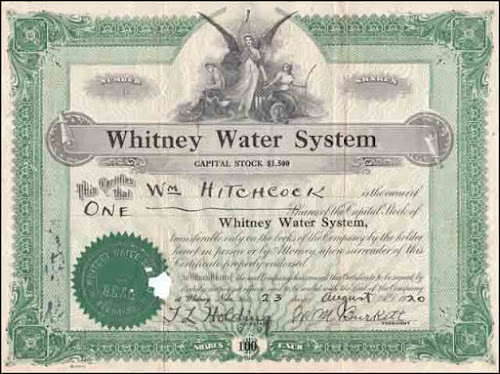 Long before the Whitney Irrigation District was formed in 1922, giving rise to optimism that a lake and extensive system of irrigation ditches would transform the region, there was a serious and continuing need for a reliable local water system.
This 1920 stock certificate issued to  William Hitchcock was the fifth such certificate issued by the Whitney Water System.   According to Mabel (Burkitt) Kendrick's book Still Alive and Well — Whitney, Nebraska, a community water system was first created in 1911.  Wells were dug near White River on the south side of Whitney, and a wooden water tower was constructed nearby.  It would be nearly a decade before a new and larger metal tank would replace the wooden structure, and that meant years of having to deal with problems of frozen pipes, manual pumps, and a limited storage capacity.
The 1920 stock issue was likely intended to help maintain and perhaps fortify the rather archaic system that was in place.   This certificate was signed by two familiar names in Whitney history:  Tom Holding, listed as secretary of the system, and W. M. Burkitt, president.  Burkitt was the father of Mabel Kendrick.
Mabel wrote that "…even though the wells were near the river, the water was very hard and strangers disliked its taste, but residents were used to it.  Nearly every home had a rain barrel under an eave spout.  At hair washing time, water was dipped from the barrel, strained through a cloth to remove mosquito larvae and heated on the range."
About a half century later, in 1975, Whitney was connected to a rural pipeline that transported water from wells in the Pine Ridge hills south of Whitney.  Water meters were installed in 1985.