One of the most tragic and brutal incidents in our regional history – indeed, of North American history – occurred 128 years ago today. The slaughter of somewhere between 150 to 300 American Indian men, women, and children became known as the infamous "Wounded Knee Massacre," and took place along Wounded Knee Creek north and east of Pine Ridge, South Dakota, about one hour driving time from Chadron. 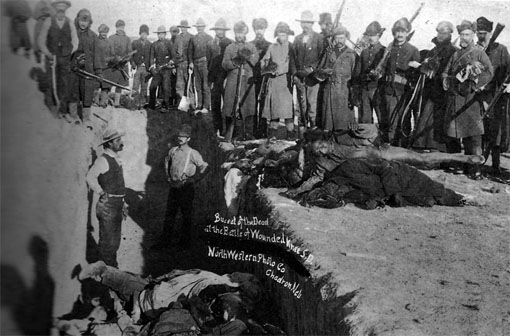 Burial of the dead in the "fight" at Wounded Knee was captured in the photograph above by Chadron photographer George Trager of Northwestern Photo Company. Accounts of the event vary, but most agree that this horrific incident marked the end of the the open armed conflict between that was commonplace across the western frontier for more than two decades.

Belatedly, I've become increasingly intrigued by the events leading up to the massacre, as well as the history that has evolved in "Indian country" in the years since. A catalyst for this interest was our good friend Leonard Little Finger, whose death in 2017 caused me to reflect upon our friendship – and made me realize how little I really knew about Leonard's youth. And I knew.....know.....even less about the Lakota culture.

Growing up not far from the Pine Ridge Indian Reservation, it's not like there was no opportunity to learn more.  Alas, youthful endeavors for me didn't include much curiosity about things beyond sports and girls.  And then work, marriage, and raising kids seems to intrude on any latent curiosity that might have existed about learning more regrading our Indian neighbors.  Such is life for many of us.

Now, having missed a rare opportunity to commune with my late friend Leonard about his heritage, I've been pursuing secondary sources ranging from books and magazine articles to video documentaries.   And so it was that on the first day of winter, December 21st, I happened across this BBC documentary of Rich Hall's "Inventing the Indian."

It deals with a wide range of "Old West" misrepresentations, and it's certainly not a television documentary done in traditional form.   After all, it's written and hosted by a white comedian, Rich Hall, who is part Cherokee,  I found the 90-minute program interesting, informative, and – in places – laced with humor.  Yes, it's even fun to watch, although that seems ironic, given the somber topic.  He may be a comedian, but Rich Hall writes and tells a good story.  We haven't "fact-checked" all of its contents, but it seems consistent with much "legitimate" academic research and writings that I've seen.

Oh, yes, there's also a bit of nasty language, but if you can stomach the reality of what history has reported about Wounded Knee, you can easily ignore or digest the salty language.