Touching the lives of others...


Okay, we know it's not fair, but we've always been a bit nostalgic when it comes to our years of growing up in Chadron.  We think a lot of folks from smaller communities feel that way.  So the photos you see here of fellow Chadron High School students Jerry Bauman and Cheryl Jo Hamilton are a bit on the weathered side.  They were taken in 1962 when Jerry was a junior and Cheryl was a mere sophomore. 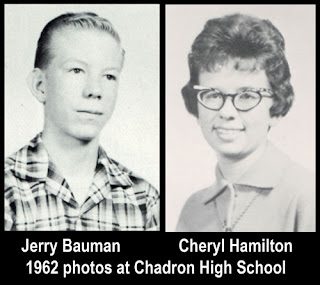 Cheryl graduated from Chadron High in 1964, and both of them lived within just a couple of blocks of the college campus, where they chose to enroll after high school.  They married while attending Chadron State.  After Jerry graduated in 1967 with a major in Physics, he took a job with Dow Chemical and they ended up in Tulsa, Oklahoma.  In 1984, he left Dow and started his own company,  which is now Bauman Instrument Corporation, based in Tulsa.   The firm provides design, sales and services for a wide range of process instruments – from food plants to water treatment facilities.

Among a bevy of major projects, Bauman Instrument Corporation helped to automate aircraft fueling systems for several U.S. Air Force bases, including Ellsworth Air Force Base near Rapid City, not far from Jerry and Cheryl's old hometown.  Last we knew, the Baumans were still living in Tulsa and had raised seven children and numerous grandchildren.

The Baumans enjoy traveling, and Jerry – once a marathon runner – reportedly enjoys bicycling and has ridden bikes in "35 states and every European country," according to a story posted by Chadron State College back in 2013.  That's when Jerry was tapped to join a select group of Distinguished Alumni at CSC.

We have long know of Jerry and Cheryl's achievements, but when we happened across the following video today, it rekindled our memories, and it heartened us learn even more about Cheryl's accomplishments with Crisis Pregnancy Outreach, Incorporated (CPO), which she founded in 1983 and which has been such a blessing for hundreds, and likely thousands, of families over the years.  CPO has provided medical services, parenting classes, and baby clothing and equipment – all without charge.