C&NW Historical Society had a big day in Chadron! 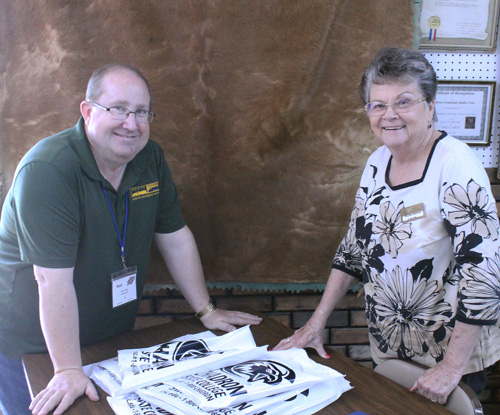 Rick Mills and Phyllis Carlson pause during a busy day – Friday May 18th – as three busloads of eager railroad buffs came to town to immerse themselves in.....railroading!

Mills, whose day-job is curator of the Railroad Museum of South Dakota located in Hill City, served as chairman of the three-day Chicago and NorthWestern Historical Society convention held last week in Rapid City.  On Friday, three busloads of conventioneers arrived in Chadron to tour the Nebraska Northwest Railroad facilities – owned and operated for over a century by the C&NW Railway.

In the afternoon, they converged on the Dawes County Museum, where director Phyllis Carlson and a bevy of volunteers hosted the group.

Of particular importance at the museum was a wonderful new exhibition of railroad photographs, artifacts and memorabilia recently donated by Chadron native Terry Sandstrom, now of Wheatland, Wyoming.  Sandstrom, wearing the ball cap in the above photo, is shown visiting with Mills at the museum.

We captured a few photos of the roundhouse and museum events and have posted them in a linked gallery.  While not all images have yet been posted, and many have not yet been identified and need captions, we thought you might like a sneak preview.  You'll find it in our C&NW Gallery.

The Chadron Record did a special report about the C&NW in Chadron for their edition published just before the convention, and reporter/photographer Brandon Davenport also assembled a story posted a week after the event.  It's headlined Chadron's Railroad History on display.