Revisiting the mysterious naming of Chadron

Traveling northward on U.S. 385 recently, I stopped near the city dam about five miles south of Chadron to read and admire the Nebraska Historical Marker dubbed "Chadron Creek Trading Post."

Not for the first time, I felt a few pangs of guilt for not knowing more of the specifics regarding the history of my old home town – and the surrounding region.  I reckon many-a-soul spend their youthful years pursuing activities other than history, and so it was with me. 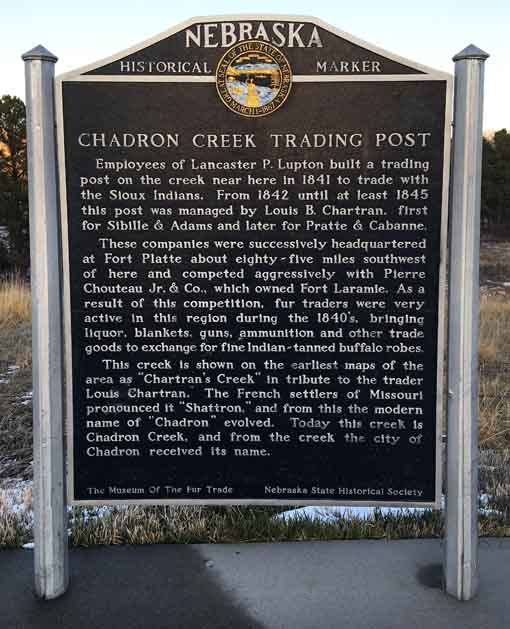 However, I do remember often hearing that Chadron was originally established in 1884 and was known as O'Linn.  And I recall hearing varied stories about Chadron being named for a fur trader by the name of Pierre Chadron.   So much for recollections.

Returning to my South Dakota home, I pulled out two important locally-produced books to which I often refer regarding Chadron history:  Chadron, Nebraska ~ Centennial History ~ 1885 to 1985; and Chadron Quasquicentennial 1885-2010.   I wanted to update my foggy memory about Chadron history, and the books did not disappoint.

Veteran historian Jim Hanson, whose impressive credentials have taken him all over the country, including the Smithsonian Institute and later the Nebraska State Historical Society, authored sections in both publications.  In them, he offered information that corrected and expanded my youthful recollections about Chadron's naming.

It seems that my "Pierre Chadron" was actually the "Louis Chartran" noted in this historical marker up the hill from city dam and Chadron Creek.   And it appears the town was not named directly for Chartran, but for the creek that carried his name – now Chadron Creek.  Hanson's story in the Quasquicentennial book does an excellent job of summarizing the history of "Chadron Before Chadron."

A few other related observations.

There were seven authors listed for the 1985 Chadron history book:  Jim Dewing, Rolland Dewing, Jim Hanson, Don Huls, Les Mann, Con Marshall, and Jon Olson.  I've had the pleasure of knowing five of those gents.  And if it was all men conspiring to put out the 1985 book (I suspect lots of ladies helped, too) things changed only a little bit by 2010 when the Quasquicentennial publication was printed. While it appears good friend Con Marshall – one of the most prolific writers I know – served as chairman, writing and assembling much of the book, ladies dominated the History Book committee.  They were Jennifer Cleveland, Bev Stitt, Rosanne Keepers, Sharon Jones, Marge Stoner, and Barb McDaniel.  While their names are not seen in bylines, they performed a myriad of tasks ranging from proofreading to advertising.

I expect in coming years we'll see more female historians.  Those researching and writing history.  If the list of winners from the recent Western District History Days at Chadron State College is any indication, that time has already have arrived.  In more than 50 years of media work, I've seen an industry dominated by men become the turf of men and women alike.

And while I'd like to attribute my interest in history to teachers at Chadron High School, Chadron State College, and Iowa State University (they were all men), I can't.  My interest in history was dormant and limited during most of those years – only to be awakened by the splendid writing and superb research conducted by the late Barbara Tuchman (The Guns of August, Stillwell and the American Experience in China, etc.)

But then, of course, there's age.  It seems to me that many of us begin to appreciate history only later in life – just before we ourselves become history.