By Con Marshall
The Chadron Airport, long an invaluable asset to the community, wasn’t something that magically appeared. Through the years, it has grown a lot like Topsy:  One step at a time, certainly without a master plan or a big-time government grant, at least initially.

The threat of war, then World War II, were major inspirations.  The desire of numerous adventurous men and several women who wanted to learn to be pilots was another mainspring in its early development.  The fact that Chadron had a college with dormitory space and food services also was a plus in the whole scenario.

There apparently were two primary instigators in getting the airport “off the ground.”  One was Arden Hixson, a native of Crookston and a Chadron State College student who later became the “poster child” for the program that was the inspiration for the airport. The other was Frank Snook, one of the area’s first pilots who was using his small plane primarily to hunt coyotes while flying out of an “airport” he had developed at Crawford.
Maybe Snook was unintentionally involved in the airport project first.  In a story printed in the Chadron Record in September 1990, he told Goldie Dawkins that in 1938 “a government official” hunted him down in Crawford and asked him to move to Lawrence, Kansas, to become an instructor for a pilot training program that the University of Kansas was planning.  The official explained that if the United States became involved in the war that seemed imminent many pilots would be needed.
“I told him I didn’t want to move and suggested that Chadron had a college,” Snook is quoted as saying in the story.  “He reminded me that Chadron didn’t have an airport, but I told him I knew the mayor and some of the council members, and perhaps something could be done about that.”
At the time, planes flying into Chadron landed at what was later known as “the Ormesher airport” east of the Dawes County Fairgrounds.  Maybe it could be expanded, but the owner of the land wanted $6 an acre for it and that was deemed to be too much, Snook told Dawkins.
Before long, Snook said the city rented or bought a quarter section west of Chadron where the airport developed.  The land met one requirement.  It was flat. But it was covered with cactuses and getting it shaped up took some doing.
Hixson entered the picture about the same time.  According to a letter he wrote for his 50-year reunion of the Class of 1940 at Chadron State, in the summer of 1939 he learned about a government plan to teach college students to fly. Hixson said he “had always” wanted to become a pilot and approached Robert Elliott, president of the college, and E.L. Rouse, director of instruction, about the possibilities of CSC becoming involved.
According to Hixson’s letter, published in Chadron’s Golden Age Courier in December 1970 along with a story written by Belle Lecher, the college officials initially weren’t very encouraging, but said they would consider it.  They noted Chadron didn’t have an airport and they didn’t know anything about aviation.
Hixson’s letter says he mentioned to Elliott and Rouse that Snook was hunting coyotes with his plane at Crawford and the college had capable faculty members who could be trained to help with the program.
Lecher’s story states Heman Carmean, the Chadron mayor in 1939, was supportive of the airport notion and when Hixson went to the city council it agreed to help.
Things moved fast.  By October 1939, Chadron State was on the list of 55 colleges in the nation that had been approved by the Civilian Aeronautics Authority for participation in a civilian pilot training program. The initial quota of students to take the training was 10, one of which could be a woman.  That would be Hope Brooker Anderson.  Hixson was one of the men.
The stories by both Dawkins and Lecher discuss the problem of removing the cactuses so a runway could be developed. The would-be aviators initially used hoes, rakes, shovels, etc., to cut them off or dig them up.  Before long, a county commissioner, probably Ward Diehl, came to their rescue and saw to it that a county road grader was made available.
Snook initially taught both the “ground school” and flight instruction, but before long Chadron State physics professor E.T. (Tripp) Michael went to Minnesota for special training offered by the Navy and he took over the ground school training.  Other CSC faculty members such as Lyle Andrews, who taught weather, and Ross Armstrong, who taught physical fitness and code, became involved.
About the time Hixson was graduating from Chadron State in May 1940, he was a winner of ground school competition sponsored by Shell Oil Co., involving 10,000 flight school students. He became Nebraska’s representative for seven-state competition in St. Louis.
The contest involved flight maneuvers needed to complete the Civilian Pilot Training (CPT) course and earn a private pilot license. Hixson also won that and went on to Washington, D.C., for more competition against the winners from the remaining six regions.
Hixson, in his letter in the Golden Age Courier, said he received a solid gold wrist watch as the regional winner and was a guest of honor at a banquet attended by more than 200 aviation notables. By the end of 1940, Hixson also had both instructor and commercial licenses and was being paid $5 a hour to teach flight in Wichita. He eventually was the flight commander at Homestead Flight Center in Florida, a pilot for Delta Airlines, an inspector for the CAA and spent the remainder of his career monitoring and evaluating flight programs, including those in a half dozen South American countries.
Altogether he had 31 years of federal service relating to flight. 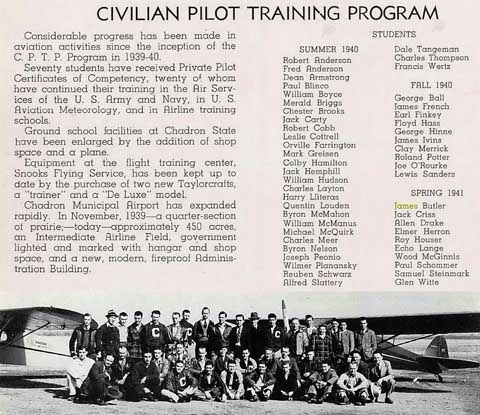 The 1941 Chadron State yearbook said since the inception of the Civilian Pilot Training program 70 students had received private pilot certification, 20 of whom had continued their training with the Army, Navy, U.S. Aviation Meteorology or airline training schools.  It also reported that the Chadron Municipal Airport had expanded rapidly to include 450 acres, an intermediate airline field that was government lighted and marked, hangar and shop space and a “modern fireproof Administration Building.”
The bombing of Pearl Harbor on Dec. 7, 1941, turned Chadron’s Civilian Pilot Training Program into something much larger.  It soon became a part of the military effort with officers coming to help fine tune the operation.
A photo in the Omaha World-Herald in June 1942 shows about 90 men standing on the front steps of Crites Hall. The caption says, “Commanded by Lt. Commander William E. Johnson, former lieutenant governor of Nebraska, a full quota of cadets are now training at the aviation station at Chadron State Teachers’ College.”  All 90 were then identified.
Snook remained in charge of the flight program.  He told Dawkins the government purchased private planes for the training.  He checked them out and accepted 34, but rejected others. He also had 40 employees. Among them was Donald Putnam, a native of the Edgemont area and later an Oelrichs rancher.  He was the program’s chief pilot in charge of the training.
Long-time Chadron resident Gus Yeradi was among the mechanics.
Before long, cadets from all over the U.S. were arriving for three months of what was called pre-flight training. They arrived, usually 30 at a time, via the Chicago and North Western Railroad, were greeted by townspeople and marched up Main Street to the college, where they ate, slept and took the ground school training. After their stay in Chadron, they went on for what was sometimes called “combat training.”
Armstrong related years later that, because the fledgling pilots needed as much daylight as possible for their training in the air, he rousted them out of bed at 4 a.m.  for physical fitness and taught them code in the evenings.
The program is often credited with keeping the college open.  The enrollment in the fall of 1943 was just 95.  By then, nearly all the able-bodied men in the nation were wearing a military uniform.
Thankfully, there were never any major accidents or injuries during the nearly four years that the Chadron program existed.  It ended in 1944 when the Navy built larger facilities to train pilots at Tinker Air Force Base in Oklahoma and the programs on numerous college campuses were shut down.
At least four men who received their preflight training through the Chadron program lost their lives while serving as pilots during World War II.  They were Melvin Butler, Lee Coleman, Earl Finkey and Francis Wertz.
Not all of those trained locally became military pilots, but were aviators the rest of their lives. An example is Clayton Feldhausen, a 1938 graduate of Chadron High School. While he was attending Chadron State, he was among the early enrollees in the pilot’s program, went on for advanced instruction and instrument rating
According to Betty Reading of Chadron, Feldhausen’s sister, he did not weigh enough to serve as a military pilot, but he returned to help with the pilot training here. He later became an air traffic controller, a corporate pilot and an FAA inspector in Denver and for the entire state of South Dakota.

Reading says her brother took his job seriously. While visiting her in Chadron, he observed a small plane flying below the altitude limit over a congested area.  When the plane landed, he met it and cited the pilot for his actions.

Editor's Note:  Thanks to Con Marshall for sharing this story.  To see these and more photographs relating to local history, visit our Early Chadron Photo Gallery.