The Eagles dominated! The Cardinals....not so much. 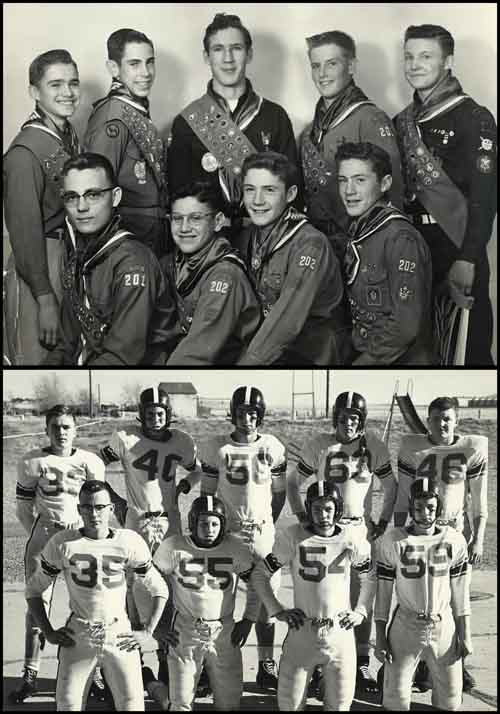 Eagle Scouts, that is.  In the fall of 1953, the Chadron High Cardinal football squad was not exactly a powerhouse.  At least, not on the gridiron.  The Cardinals won four games, while losing six.  Off the field, however, nearly one-third of team chalked up a hefty achievement:  nine of them were Eagle Scouts!

In the early '50's, there were two scout troops in Chadron:  Troop 201 and its scoutmaster, Clyde Wiley; and Troop 202, whose scoutmaster was Frank Schell.

In both photographs above (left-to-right);  Back row:  Eric Pokorney, Bob Crawford, Rex Jones, Louis Riemenschneider, and Floyd Coleman, who was an All-State guard;
Front row:  Larry Smith, Dennis Weaver,  Don Jones, and Ron Jones -- or simply "Twin" for either of them, which was a technique many of us used when we simply didn't know which was which. (And we may have it wrong here again!)

Larry Smith was one of these nine youngsters, and he remembers, "The total number of players on the team probably numbered around 30, so nearly a third were Eagle Scouts.  That didn't make the team successful...however, we could claim to be trustworthy, loyal, etc., and help little old ladies cross the street!"

"We also got some new football helmets, made of plastic, to replace the old '40's leather helmets.  Note, however, there were no face guards, so your teeth were still in jeopardy during a game.  During the last game, which was against Crawford, it was below zero.  Some of the new helmets cracked in the cold."

A tip of the hat to Larry Smith for providing this information -- and these great old photos!