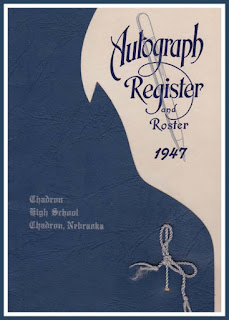 Some years back, Bob Galey of Whitney, Nebraska passed along this item that he had found at an auction in Chadron. We "re-discovered" it while rummaging through some envelopes of collectibles.

We were impressed that the folks at what was then called the "White Bank" at the intersection of 2nd and Main in Chadron (officially known as the Bank of Chadron) would provide 1947 graduates at Chadron High School with a dandy-looking little booklet called an Autograph Register and Roster - 1947.

Inside we found signatures of folks like Joe Folsom, Everett Thompson, Lois Fountain, Harold Ostrander and Betty Feldhausen — among others — along with a few inspirational poems and lots of room for notes about athletics and music, as well as other school activities.

Most delightful, however, was a roster of Faculty and Senior Class members from that era.

Long-time Superintendent H. A. "Heinie" Schroeder was on the job then, and the Principal was Dora Taylor.   Among the 13 faculty members we found listed were some we knew, including Edna Keal, Vera Krantz, Merle Lecher, Esther Miller, James Myers, and Curtis Thompson.   We recently did a story about Naomi Wilson, who was also listed among the faculty.  That was a revelation to us, since we knew only of her classroom service at West Ward and Chadron Prep.

You may want to peruse the listing of 1947 seniors at Chadron High School.  Perhaps you'll come across some names of folks you know!

And we liked the Class Motto: "Something Attempted. Something Done." 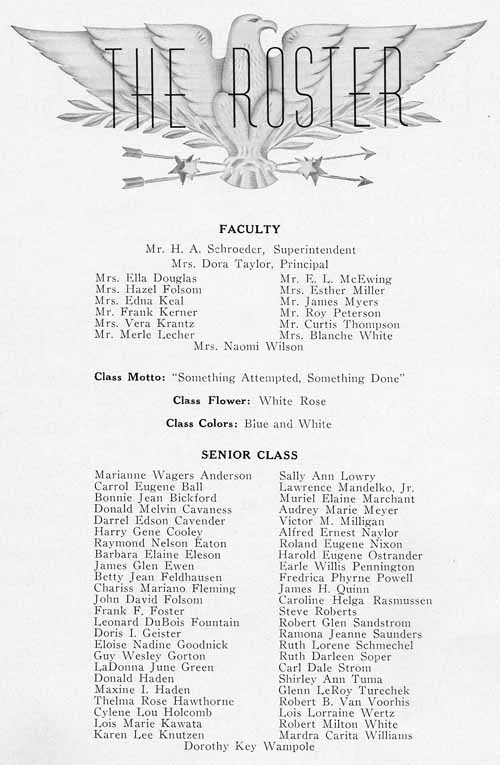