The Great Race: Still running after all these years! 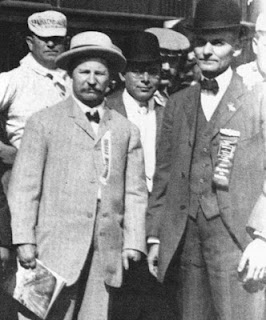 While it may have started as something of a novelty, the "Chadron to Chicago Horse Race" spurred lots of interest across the region 120 years ago this month.

"Billy the Bear" Iaeger and Dawes County Sheriff James Dahlman were among the folks who finally put together something of a real race. Seems that newspaperman John Maher had floated the myth of such a race, but thanks to some local determination, it really came about.

The horse race story still has legs. We enjoyed a rather lengthy piece put together by David Hendee of the Omaha World-Herald, and you can find it, replete with photos and maps, by clicking on Chadron-to-Chicago Race.

Hendee worked with Belle Lecher and others of the Dawes County Historical Society in putting this feature story together.  It was interesting to connect Billy Iaeger with Chadron Fire Chief J.O. Hartzell. Hartzell is attributed with firing the pistol that started the 13-day race across the plains.

The names Hartzell and Iaeger were prominent, too, in the creation of a 1916 movie about Calamity Jane and Wild Bill Hickok.  Made in Dawes County, it never won an academy award, but it's fun to learn about the entrepreneurial and promotional activities of some of the old timers!