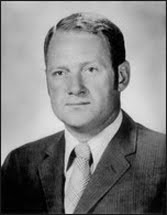 Another well-known alum from the 1950s at Chadron High School has died.

Ronald Louis Brown died last Friday (2/19/10) at his home in Montgomery, Illinois, a suburban community just west of Chicago. He was 71 years old.

“Speck” was a four-year letterman in football and basketball during the mid-1950s at Chadron High and served as Vice-President of the Junior class in 1954-55. Long-time Chadron writer Con Marshall remembered that "All three Chadron basketball teams won district championships, but only Chadron High reached the state tournament. The Cardinals won the Class B district title by beating Bridgeport 69-38 after losing to the Bulldogs 67-66 the week before and downing Bayard 58-49 after falling to the Tigers 83-63 in February. Chadron then topped Valentine 55-54 in the regional playoff. Coached by Verne Lewellen, it was the Cards’ first trip to state since 1933. At state, Hebron beat Chadron 56-50 as the Cards made just half of their 32 free throws." 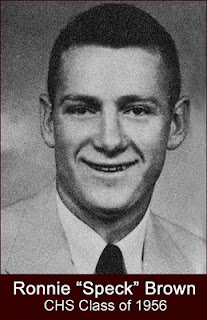 A 1956 graduate of Chadron High School, "Speck” was among the handfull of varsity basketball players who also coached 5th and 6th graders, and he called his team the “Wildcats.” Both “Speck” and his older brother Clayton were athletes and well known throughout the community. You'll find a Ron Brown in several of the photographs we've posted in our Chadron Public Schools Photo Gallery.

According to his obituary, Ron did a tour with Army Special Forces after high school. He later went to work in the automotive industry.

Ron Brown was preceded in death by his daughter, Valerie Nicholson; his sister, Ermel Brown; and his parents. He is survived by his wife, Beatrice, and children: Kimberly (Les) Fugate and Victor Davidson; four grandchildren and seven great grandchildren. Also surviving are his brother Clayton Brown and sister Marjorie Williams.