As far back as I can remember, I've been a big fan of Art Carney, the celebrated actor who portrayed Ed Norton in the Jackie Gleason Honeymooners television series.
~ 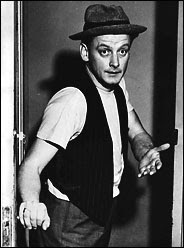 Carney has been dead some 15 years, having died in 1993 at the age of 85. But many of us well remember his infectuous dialogue as Norton, the "underground sanitation expert," and some of us even remember his career as a singer.

Well, his recording Song of the Sewer was popular, but it just never quite made it big in northwest Nebraska. It's one of the few songs ever banned from KCSR Radio in Chadron. I do remember hearing the song on the station in the mid-to-late 1950s, but I also vividly recall it's being "banned" some time later.

Not a great piece of music, perhaps, but it was a snappy bit of satire that only Norton could pull off. What was all the fuss? Well, judge for yourself. Quite by accident, while surfing the web, I came across this version of Song of the Sewer.

Carney apparently professed to be nothing like Norton. I remember reading that Carney was wounded at Normandy during World War II and walked with a limp for the rest of his life. Like so many from that war, he came home and got on with his life -- and what a life it was!