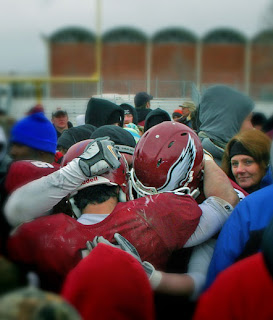 It was a sad ending to a terrific season for the Chadron (Nebr) State College football team Saturday (Dec. 1) as Northwest Missouri University handily rebuked the Eagles 26-13 in the NCAA Division II quarterfinals in Chadron.
Gone was the stellar last-quarter comeback of a week earlier, when the Eagles defeated Abilene Christian 76-73 after trailing by 29 points at the end of the third period.
The post-game congregation this week was a solemn one at Elliott Field. In the photo above, two Eagle players console one another, while family and fans looked on. 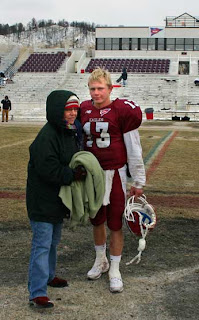 There is little doubt that the Maryville, Missouri powerhouse deserved the win. Their play and statistics were impressive as they continued their march to the Division II playoffs later this month in Alabama. Nebraska native Xavier Oman of Beatrice set a Bearcat school record for rushing in a single game, collecting some 306 yard for the day. Chadron State College ended another great season with a record of 12-1. After the game, a CSC fan (left) hugs quarterback Joe McLain on the 50-yard line.
-
”I’m overjoyed with what we accomplished this year,” Coach Bill O’Boyle said. “We’ve had 12 wins and we came back from a lot of adversity. The guys did a great job staying together and they played as a team. I couldn’t be happier for them.”