The Eagles Had Heart! 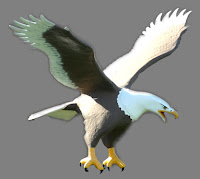 The song "Heart" from the Broadway show “Damn Yankees” back in the mid-1950s became a hit recording for both Eddie Fisher and the McGuire Sisters.

But its lyrics could well have been penned for the Chadron State Eagles football team in their stellar comeback last weekend (Nov. 24th) against Abilene Christian.

The Eagles simply wouldn't accept defeat. Despite trailing the Abilene Christian "Wildcats" by 29 points in the third period, the CSC "Eagles" displayed great stamina -- and even greater heart -- by chipping away slowly at that margin as the minutes and seconds raced off the clock in the fourth quarter. It was a second round NCAA Division II playoff for the southwest region, played in Chadron (Nebr.) on a soggy Elliott Field.

You've gotta have hope
Mustn't sit around and mope

The heart displayed by the Eagles shone no brighter than from the CSC sideline, as star running back Danny Woodhead climbed atop a bench, as he often has done this year, to rally the crowd behind the Eagle defense. The sheer tenacity of offense and defense alike allowed the Eagles to narrow the gap -- albeit at a pace that was agonizingly slow. The clock was not their friend. But finally, at the end of regulation play, Chadron State had managed, almost unbelievably, to tie Abilene Christian, 56-56. A joyous moment for Eagles fans, and a moment of consternation for the many fans who'd left the game at the end of the third period. 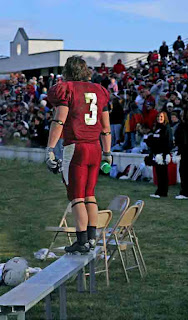 -
When your luck is battin' zero
Get your chin up off the floor
Mister you can be a hero
You can open any door...
There's nothin' to it but to DO it!
-
And then there were THREE overtime periods. In the end, it was a series of enormous team efforts that gave Chadron a 76-73 win over Abilene.

The high score and great drama caught the attention of the New York Times, which has enjoyed giving its lofty, if not somewhat condescending, coverage of "tiny Chadron State." It reminds me of the perpetual toungue-in-cheek coverage of Slippery Rock (PA) football scores over several decades.  Read what the Times had to say about the Chadron State-Abilene Christian game.

Our appetites, and those of thousands of other Eagles fans, are whetted for the next chapter in this wonderful unfolding of Chadron State College athletic history. That will occur next Saturday, December 1, when the Northwest Missouri University team invades Chadron for another round of Division II playoffs. Stay tuned!
-
Hats off to the Eagles -- they had heart!